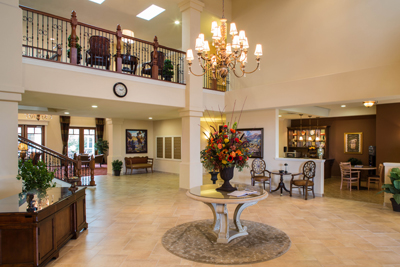 At Oakmont of Santa Clarita, rainy days are enjoyed by residents with a variety of indoor activities and outings alike, such as yoga, movies and a drive to nearby Fillmore.

“There’s always activities going on,” said Mary Dembkowski of Oakmont of Santa Clarita, noting that when she left the senior living community, there was a yoga class taking place and a movie playing in the movie theater.

The Disney nature documentary “Chimpanzees” was the movie of the day during a recent rainy day, and Dembkowski said movies cover a wide range of genres.

“We have our own movie theater,” she said. “It’s got two-tiered seating, it’s got a full screen with a projector.”

Earlier this month on a mild rainy day, residents had the chance to attend an outing to Fillmore to have lunch at a restaurant called El Pescador.

“Despite the rain we still have our outings,” Dembkowski said. “It’s a great Mexican restaurant, so they actually ventured out to Fillmore … and had lunch, even though the food at Oakmont is … great. But we do like to incorporate that element in our activity program of experiencing different things, whether it’s in Santa Clarita or out of Santa Clarita. They do some great outings.”

Then during their regular Wednesday “Happy Hour,” residents celebrated St. Patrick’s Day with green beer, hors d’oeuvres and Irish entertainment, followed by a corn beef and cabbage dinner that weekend served by the community’s executive chef.